Kuala Lumpur, 5 March 2019 – Want to experience first-hand thrills of high speed rides and off-road driving, as well as the proven capabilities of the new Triton? Then come and experience the taste of Dakar Rally as Mitsubishi Motors Malaysia (MMM), the official distributor of Mitsubishi vehicles in Malaysia, brings you the Mitsubishi 4Sure Thrill event with two-time Dakar Rally champion Hiroshi Masuoka from Japan and Malaysian Motorsports Athlete, Leona Chin! 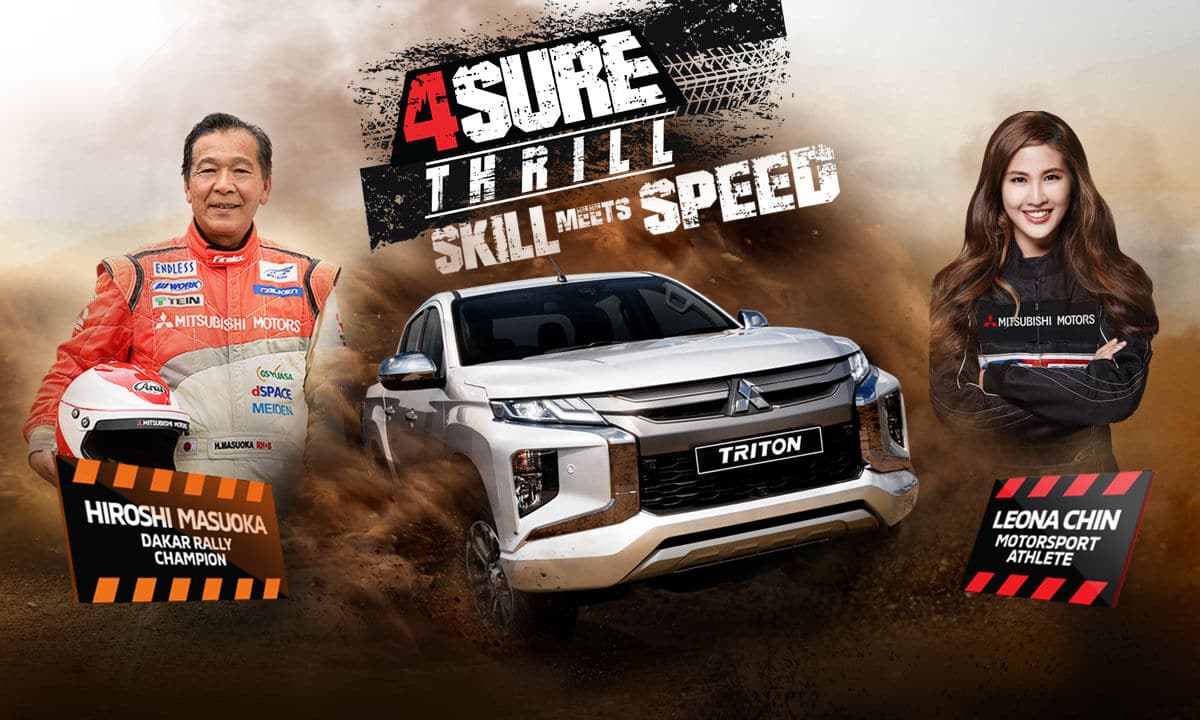 The event will take place on 9-10 March 2019 (Saturday-Sunday) at Setia City Convention Centre, Outdoor carpark from 10am-8pm. Admission is free.

Hiroshi Masuoka and Leona Chin will be leading the high speed taxi rides by showcasing the capabilities of the new Mitsubishi Triton. The new Triton adopted four pillars under the 4Sure Handling USPs: 4Sure Power; 4Sure Control; 4Sure Agility; 4Sure Safety. With these four pillars, customers are assured of a vehicle that is built to high standards and performance

Hiroshi Masuoka is the second only Japanese driver in history to win the Dakar Rally in year 2002 in a Mitsubishi Pajero/Montero. Masuoka took a second successive victory in 2003. Mitsubishi Motors is the most successful make in Dakar Rally history, winning the “World’s Toughest Race” a record of 12 times.

Besides riding on the high-speed rides with Hiroshi Masuoka and Leona Chin, customers can test drive the new Triton on an off-road track with uneven surface and muddy terrain which was specially designed to test Mitsubishi Motors Super-Select 4WD II system and off-road mode. The track also features a descending track to test the Hill Descent Control on the new Triton.

Visitors to the event can also expect the following:

More about the new Triton
The new Triton is priced from RM100k and available with a choice of five variants andfour colours.

Prices are quoted on-the-road without insurance (10% SST inclusive) for individual private owners only in Peninsular Malaysia and not applicable in duty free zones.

Pick-up trucks are the foundation of Mitsubishi Motors and the company has been producing pick-ups since 1978. Over 40 years, much experience has been gained not only in engineering reliable and durable vehicles but also understanding the needs of diverse customers.

The new Triton is based on the concept of ‘Engineered Beyond Tough’ and has 40 years of experience in developing pick-up trucks that are durable, reliable and comfortable.

For more information on the new Triton, please visit http://www.mitsubishi-motors.com.my/triton